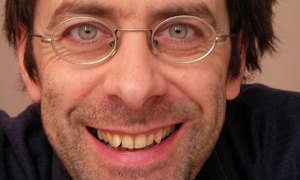 While flicking through the web on my weekdaily evening meander northwards through County Meath yesterday evening, I came across Julian Gough’s brilliant rant from a couple of years back on the state of Irish writing.

His answer to a question concerning the current state of Irish literature might have started with (I paraphrase) “I haven’t the faintest idea as I’ve been living in Berlin and I don’t read any Irish writers”, but he went on to comb the literary scene here with a scathing eye.

If I were a published young Irish writer in the two or three years preceding February 2010, I might not be so generous, but these were some my favourite lines:

If there is a movement in Ireland, it is backwards. Novel after novel set in the nineteen seventies, sixties, fifties. Reading award-winning Irish literary  fiction, you wouldn’t know television had been invented. Indeed, they seem apologetic about acknowledging electricity (or “the new Mechanikal Galvinism” as they like to call it.)

I do read the odd new, young writer, and it’s usually intensely disappointing … Irish literary writers have become a priestly caste, scribbling by candlelight, cut off from the electric current of the culture. We’ve abolished the Catholic clergy, and replaced them with novelists. They wear black, they preach, they are concerned for our souls. Feck off.

(The whole thing is available over here)

Reading it now, at a remove of almost three years, it prompted the question: have things improved at all?

Is RTE, post-Love/Hate (which I admit I’ve missed entirely – I missed the first few episodes of Series 1 and I never manage to get into any Irish-produced drama series retrospectively), a more nurturing environment for talented Irish screenwriters?

If they do, are publishers here courageous enough to take a chance on them, or must they still, as Gough bitterly points out, traverse the Irish Sea to find a willing ear?

Some of this year’s most well received books by Irish writers have come from UK houses. I’m thinking specifically of Keith Ridgway’s Hawthorn and Child (Granta) and Kevin Barry’s Dark Lies the Island (Jonathan Cape).

Of course, City of Bohane (Vintage) had already brought Barry within the Random House group, but I wonder whether any Irish publisher spurned the chance with that one beforehand?

And are there any editors out there who passed up an opportunity on Hawthorn and Child?

But Gough’s piece from 2010 – Graham Linehan is a genius, but he’s been working out of London, with UK broadcasters, since his early 20s, so he has no reason to address Ireland. We had other geniuses, a decade or two back, but we didn’t want them either – left no-one in any doubt of his opinion that Irish writers of any note have to quit the country to progress.

I wonder whether the three years since then have seen any positive change in Irish writing, Irish publishing, or both.

2 thoughts on “Three years on from Julian Gough’s rant, has Irish writing (and Irish publishing) changed for the better?”